The TA2022 Expedition on board the chartered MV Ulla Rinman is a floating base for eleven participants and their individual research and science communication projects. The main focus is an archaeological one (see RiS ID 11947). A ship-based expedition is essential in order to reach, to access, and to investigate carefully chosen sites, some of which are already known to the team from previous fieldwork, some of which they have not visited before. The PI and expedition leader is Dr. Frigga Kruse. Responsible for scientific content, planning, coordination, and bear watch, she will also visually re-assess the archaeological potential of any sites visited in order to assist with formulating new research questions in Svalbard archaeology and cultural heritage. Note: Not all child projects needed to have their own RiS IDs. 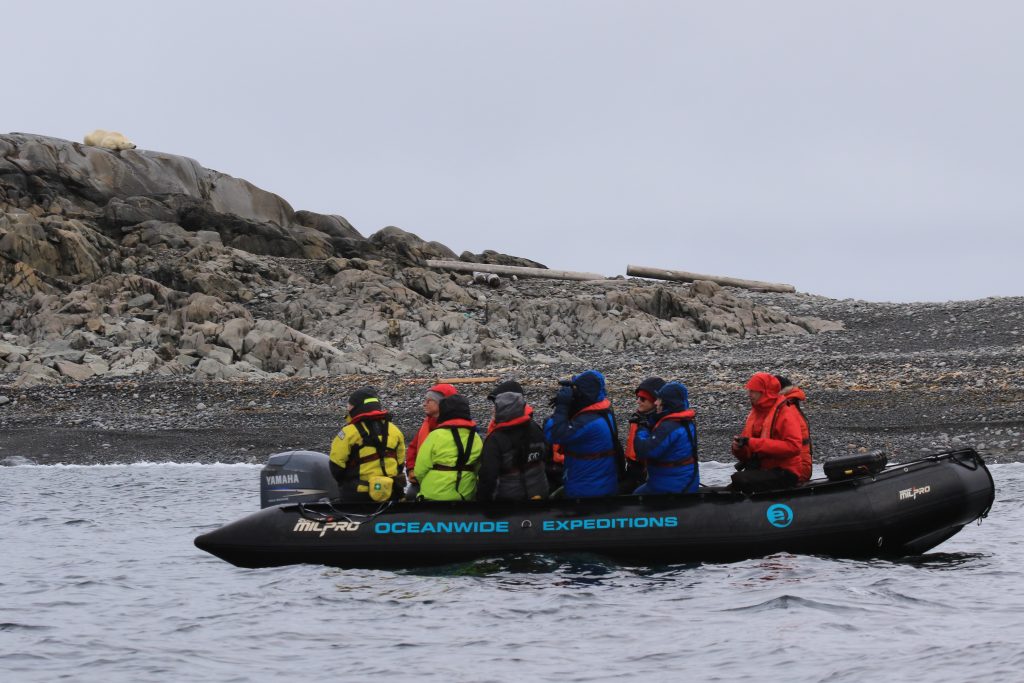 The research project „What makes a happy, healthy, and successful Polar Researcher?“ is located within the field of positive psychology. It aims to analyse work-related patterns of experience and behaviour in the crew of the Timeless Arctic 2022 Expedition, and to explore which traits, attitudes, and resources enable those individuals to work in a fulfilling, healthy, and productive manner.

To do so, an assessment of work-related patterns of experience and behaviour will be executed using the empirically validated test instrument AVEM, a multi-dimensional personality-diagnostical procedure used for the differentiated analysis of attitude towards and satisfaction with work on eleven scales, with a focus on health-related statements. Further, explorative qualitative interviews will be conducted (based on a semi-structured interview guideline) focusing on factors such as purpose of work, resilience, resources to meet challenging and stressful situations, dealing with challenges, and motivational focus. AVEM results will be clustered into pattern groups, the interview data will be analysed following structured content analysis as proposed by Mayring (see e.g. Mayring, 2005; 2010). The goal is to identify traits, attitudes, approaches, resources, and behavioural patterns shared by researchers working in a healthy, engaged manner.

This should contribute to the broader field of what may enable a person to be highly productive while also feeling fulfilled, satisfied, and maintaining good health – especially in extreme situations/circumstances.

RiS ID 11722: Isolation of psychrophilic bacteria and detection of glyphosate

It is already known that pesticides have an influence on the antibiotic resistance of bacteria and that such resistance also occurs in Arctic air. For this reason, soil and water samples are being collected as part of the field work and examined in Germany. The aim is to isolate known psychrophilic bacteria and to investigate the physiological metabolic properties. In addition, antibiotic tests will be carried out to find out whether antibiotic activities similar to those of bacteria from our latitudes can be detected. In addition, new antibiotically active natural substances for medical and biotechnological applications will be specifically sought. The test for glyphosate, which will also be carried out on the samples, will make it possible to establish a link between the presence of this herbicide and possible antibiotic resistance if glyphosate is found. The project is a sub-project of TA2022 and sampling locations can be selected as required along the expedition route (e.g. Longyearbyen, Trygghamna, Dolerittneset, Kraussbukta). It is assumed that samples will be taken during all land visits. These will include about one litre of water samples and about 50 ml of the top, loose soil layer.

My project idea is to develop an interdisciplinary teaching unit (geography, history, biology) of 6-8 school lessons on the guiding theme „Research in Svalbard – The Timeless Arctic Project“. The lesson should be interactive and supported by geomedia. The focus is on linking research and school. Networking with selected groups of students is aimed at before, during and after the expedition. This allows the students to actively follow the expedition and intensify their relationship to the work in the field. The entire teaching unit is then publicly available to other learning groups.

The aim for the students is to learn in an exemplary way how research in the Arctic works and why it is important. The Timeless Arctic Expedition (TA2022) will be used as a concrete example. In this way, the students will get to know the Arctic habitat and understand why this habitat is worth being protected and how they can treat the environment with respect today and in the future. Furthermore, the students should critically engage with different topics such as climate change, nature and resource conservation as well as sustainability and draw conclusions for their own (sustainable) actions and their spatial impact. The project also aims to show that the Arctic offers a wide range of highly relevant topics for meaningful integration in the teaching of various subjects.

During TA2022, I would like to support the other participants in their work and record their steps for the students in photos, film and interviews. The material collected and the many new experiences will be incorporated into the lesson. With the help of a collection app (Survey123 by ArcGIS), the locations of the excursion route will be recorded in order to subsequently create interactive maps for the teaching unit and possible presentations. In addition, the air and water temperature and the salinity of the water will be measured at the locations. Measuring instruments will be used which can also be operated by students and which they can try out in class before and after the excursion. The measuring instruments from the school laboratory supplier Phywe are designed for mobile use with students in combination with mobile devices (e.g. iPad).

Life on earth is beautiful but tainted by human activity. In IASC’s recent State of Arctic Science Report (IASC, 2020), the framework of the Third International Conference on Arctic Research Planning (ICARP-III) it notes the importance of “[m]onitoring contaminants and pollutants (including plastics) in all parts of Arctic human-environment systems” (IASC 2020, p. 6). Furthermore, plastics in the (marine) environment are listed as Emerging Arctic Research Issue under the subtopic Pollution: Sources, Sinks, and (Societal) Impacts. Macroplastic will be collected and assessed at beaches. To assess microplastic content, deposit layers will be sampled. Using a handheld soil core sampler, the depth to which microplastic particles can be found will be determined. These measurements will provide information on the current state of plastic pollution in remote Arctic areas and connects therefore with IASC’s ICARP-III Pillar 3. Furthermore, a vertical distribution map of microplastics within the active layer can be generated. Not only could this serve as a proxy for similar deposits but also give a relative time-depth to microplastic distribution.

I want to use different media to make science attractive to children. To do this, I would like to conduct interviews during the Timeless Arctic Expedition 2022 and in the run-up in Longyearbyen. Also, geological rock analyses of the South-Eastern Archipelago of Spitsbergen. These are being studied at the universities in Kiel and Bremen.

The walrus (Odobonus rosmarus rosmarus) and the bowhead whale (Balaena mysticetus) have been hunted in the waters of Svalbard for centuries. Both species are endangered now, with the walrus showing clear signs of recovery, while the bowhead whale is still struggling. Numerous skeletal remains of these two taxa are spread all over Svalbard, yet zooarchaeological research on these remains have not received a lot of attention in Svalbard just yet. The skeletal remains provides an unprecedented opportunity to assess past marine mammal hunting practices, population sizes, and post foraging ecologies of the two taxa.

The Osteometric and Biomolecular analysis of Archaeological marine mammals (OBA) project intends to analyse walrus and bowhead whale remains at six relevant archaeological sites (Trygghamna, Dolerittneset, Kraussbukta, Gåshamna, Skjerodden, and Sørkappøya). By performing measurements on skeletal remains (osteometric analysis) of the two species at these six sites, it will be possible to assess how large individuals were in the past and whether their size is potentially different from that of contemporary individuals, whether males and females were both targeted, whether young individuals were targeted as well (which could have had a dramatic impact on the populations), and whether hunters had a preference for targeting individuals of a particular size or hunted opportunistically. Moreover, OBA proposes to sample a small number of walrus and bowhead whale remains from the six sites.

The samples taken will only be one gram each (about the size a small marble), will be taken from places on the bones where they will not be clearly visible (ensuring that the cultural value of the bones is not altered in any way), and will be done in a respectful manner. On these samples a number of biomolecular analyses can be conducted. These methods include 14C-dating, which will allow to assess when the individuals were hunted and killed by hunters and will allow to put the six archaeological sites in a historic contexts. Additionally, stable isotope analysis can be conducted on these bones, which will allow for an assessment in changes in foraging ecologies for the species through time, which might potentially reveal anthropogenic pressure on the two taxa as well.

Moreover, ancient DNA (aDNA) analysis can be conducted on the bones, which will allow for a detailed assessment of how severely the two taxa were depleted through time, how fast the populations declined, and at what point a genetic bottleneck was reached as a direct result an anthropogenic pressure. Together, the analyses on the walrus and bowhead whale, and specifically the application of multiproxy analysis (e.g. aDNA analysis, 14C analysis, stable isotope analysis and osteometric analysis) on the same specimens, allows to reconstruct marine mammal hunting activities in Svalbard and reconstruct past ecologies of these two endangered marine mammals. Moreover it will allow to assess long-term trends in the anthropogenic impact on the polar environment and develop proxies and models to describe and explain the historical processes.

Destructive analyses are proposed as part of this project, but it is the applicant’s strong belief that the sampling can be undertaken in a manner that is very limitedly destructive, ensuring the value of cultural heritage is not altered in any kind of way, while providing a wealth of information regarding past marine mammal hunting practices.

The release of explosives from dumped munitions is an issue of global concern as these toxic substances accumulate in the tissues of marine organisms. Due to military activities during the Second World War and the shelling of Longyearbyen during Operation Zitronella, it is likely that munitions are still in the sea there today. We want to study whether we can detect explosives in the sea around Spitsbergen. Primarily, water samples are to be taken, concentrated on site and measured in the laboratory using gas chromatography-mass spectrometry (GC-MS). If available, sediment and biota samples (e.g. feathers or algae) should also be analysed. The samples taken will also be analysed for other anthropogenic pollutants that can also be transported to pristine areas such as the Arctic by atmospheric and marine transport processes. These are for example pharmaceuticals such as ibuprofen and diclofenac, pesticides such as DDT and lindane, and organometal compounds such as methyl mercury, tetraethyl lead and organo-arsenates. The laboratory examinations are carried out at the Institute of Toxicology in Kiel.

This project is funded by