The bowhead whale (Balaena mysticetus Linnaeus, 1758) was extensively hunted for its blubber and its baleen. You can find more information about the species on Worms (World Register of Marine Species), the IUCN Red List of Threatened Species, and on the website of the Norwegian Polar Institute.

On our page, we provide you with a glimpse into the historical archives. What do the documents of old tell us about the bowhead whales around Svalbard? 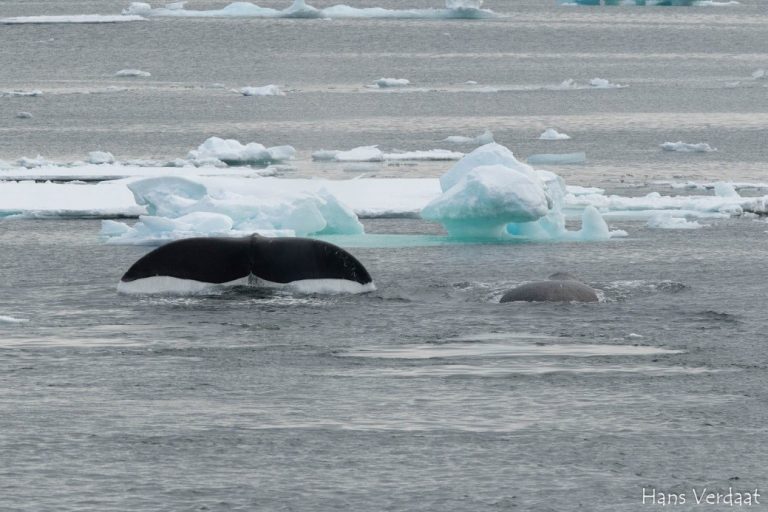 This project is funded by

Towards evening, it cleared up a bit, and we saw a big thing floating in the sea and thought that it was a ship. Coming closer, it was a dead whale with a large number of seagulls. It gave off a big stench even after we had sailed twenty miles.

Willem Barentsz first documented Spitsbergen (today Svalbard) in 1596. De Veer’s reports of Barentsz’ three journeys into the Arctic only mention two whales. This one was dead; another was sleeping in front of the bow. His reports were presumable not the underlying reason why the commercial whaling industry developed in Svalbard.

[…] wee continued (God be thanked), without anie want of whales, till our voyage was made; not receaueing anie intermission of rest but onelie on the Saboth daie. For, when some slept, others wrought; and, haueing a continuall daie, wee allowed no time of night for all men to sleepe at once, but maintained work from Sundaye about 5 a-clock, afternoon, till Saturdaye at 12 a-clock in time of midnight; dureing wch time our men receaued no other recreation from work and sleepe but onelie the time of eateing their meat, whereof they had sufficient, thrice in every 24 howers: besides, some of them had allowed aquauitæ at each 4 howers’ end.

We are confident that Fotherby’s 17th-century English needs no translation.

In 1611, a first bowhead whale was killed in Spitsbergen waters. Already in 1613, the English mariner Fotherby provides very detailed descriptions and images of the emerging whaling industry. The above description gives an insight into a whaler’s day. To make a voyage meant to return from the whale fishery with a fully laden ship.

In the morning, we heard a whale blow when the sun was in the east. We brought a female whale to the ship, when the sun was east to southeast. The same day, we cut the blubber off and filled 70 barrels. We noticed a lot of birds near this fish, most of them were fulmars, and they were so eager for the food that they were slain with sticks. This fish was betrayed by the birds because you could see many birds everywhere on the sea where the whale had been. He was already wounded with a harpoon that was still in his flesh. The whale was tired from the heavy swimming and blew completely hollow. It was so inflamed that it stank alive and the birds ate from it. The whale was practically fermenting when it was dead, and our eyes stung from the stench.

Martens was a physician from Hamburg and provides a very detailed account of the so-called Greenland fishery in the early 1670s, when the whaling stations in Spitsbergen were already abandoned and whaling had become pelagic, i.e. it had moved out to sea. Hence, the blubber is stored in barrels and taken back to Hamburg as opposed to boiled out on land.